HATS, the Theatre Club and origins of theatre in Holsworthy

Very little is known about the exact origins of theatre in Holsworthy and there are several conflicting accounts. It does seem, however, that the earliest mention of a theatre group was in the Western Morning News on Tuesday 13th January, where a “laughable farce entitled The £500 Prize” was performed at the end of business for the League of Liberal Unionists in Holsworthy Town Hall on January 9th.

The society would perform again in February at the town hall, this time a comedy – A Desperate Game, a farce – A Learned Woman, and a drama – For Her Child’s Sake.

The Cornish and Devon Post of Saturday 24th February 1906 records that Holsworthy Amateur Dramatic Society produced a programme of “vocal and instrumental music and two farces – Dr. Diaculum by Byam Wyke and Mixed Pickles by J.C. Beck”, performed at the National Schools. Proceeds of over £6 were given for the debt on the church bells and carillon.

Holsworthy Dramatic Society was created (again!) by Mr. Jacob Ritblat, a dentist who came from Bristol to live in the Holsworthy area. One can only presume that the previous incarnations lost momentum. Mr Ritblat gathered together a group of people to read and perform plays. Performances were formal occasions, with women wearing evening gowns and gentlemen in dinner jackets, and, especially in the early days, the plays were staged in Holsworthy’s Market Hall.

The Dramatic Society perform The Maker of Dreams by Oliphant Down– it was broadcast over national radio at 8:40pm on Wednesday 6th December.

Mr Ritblat moves away and Mrs. Fulford Oke takes over the helm of Holsworthy Dramatic Society.

Holsworthy Dramatic Society often donated its proceeds to charities such as the British Legion, however it was announced in the Western Times that the proceeds of one of the Thursday performance of Clifford Bax’s play The Immortal Lady should return to the society to help with its future productions, having no funds on which to fall back on!

The exclusivity of the Holsworthy Dramatic Society is revealed by Mrs Fulford Oke in an interview with the Western Morning News – Although formerly men were permitted to wear dinner suits, this regulation had been relaxed and lounge suits were permitted, however tweed was banned, as were wool frocks for the women, who were expected to wear “semi-evening dress.”  The society had a cap of 30 members – to be a part of the Dramatic Society, you would need to be proposed and seconded, and then the committee would give their ruling. If the committee accepted your application, you would only be able to become a member if you survived the audition.

Through the war years, the Dramatic Society continued to present plays at the theatre, with proceeds regularly donated to the British Red Cross, the Holsworthy branch of the Royal British Legion and the “Welcome Home Fund.”

Mary Kelley (nee Crumblehulme), the Holsworthy Guide Leader produces the pantomime Aladdin at the Market Hall. As a result of the success of the pantomime, the Theatre Club would form the next year.

Holsworthy Theatre Club form as a far more inclusive way for the people of Holsworthy to become involved in theatre. The Theatre Club would go on to produce musicals and plays, rehearsed at the White Hart, and shown in the Market Hall.

Rehearsals begin for the first musical to be produced in Holsworthy – Sunny with music by Jerome Kern and lyrics by Otto Harback and Oscar Hammerstein II. Rehearsals took place in the White Hart. Younger members were not allowed to enter the pub so they were rounded up and taken through the barn to the rear. The barn floor was a little unsafe, so only half the cast were allowed to dance at any time in case they all plunged into the stable below!

Rehearsals of The Theatre Club moved to permanent rented premises in Chapel Street. These premises consisted of two rooms – one for meetings and rehearsals, the other for storage. These rooms were located behind Lower Kinvers and Barbara Holnes’s Tobacconist-come-barber-shop.

Mary Kelley moves to Plympton, and her brother Bill Crumblehulme took up the directing helm for the Theatre Club. Bill’s philosophy was simple – his plays were designed to allow you to forget the world outside with all its cares; laughter is the sound of ‘angels singing.’

Mary Kelley and her husband Val return to Holsworthy from Plympton and rehearsals for the first pantomime by the Theatre Group, Dick Whittington begin.

The old Tudor Cinema, Bodmin Street listed for sale at £2,850. It is listed as “Light Industrial Factory Premises,” as it had most recently been used as factory premises for Stockard Systems Ltd.

Townspeople called to a meeting on 29th January at the Market Hall to discuss the acquisition of the cinema and turn it into a Theatre. This would provide Holsworthy’s theatre groups with a more permanent home. At this meeting, it was agreed to purchase the cinema.

Initially, it was thought that a minimum of £5,000 would be needed to make this dream come true; £2,000 to purchase the theatre and a further £3,000 to convert it. £650 was available for purchasing the theatre from the accounts of HATS, £150 was received from Holsworthy Rural Council and Members and Friends contributed funds – the cinema was subsequently purchased for £1,700. Converting the theatre would become a real labour of love.

At a meeting on 27th July, The Theatre Club and the Dramatic Society officially merge to form HATS (Holsworthy Amateur Theatrical Society) as suggested by Mary Kelley. At this meeting, a resolution was passed that the old Cinema would be purchased and converted. The theatre’s first trustees were appointed – Edgar Clark, Val Kelley, James Rowland and Geoff Tucker, and their signatures placed on the contract of purchase.  James (Jim) Crumblehulme suggested that a Society embracing all those interested in amateur dramatics and a theatre for Holsworthy be formed. And this was HATS.

The first HATS pantomime Mother Goose is rehearsed in the cinema.

Work begins on the new theatre. Dr. Nicholas Blood designed the stage and Mike Wood was Clerk of Works. Holsworthy Town Band turned up with trowels and an army of volunteers dug out the orchestra pit. Seats were purchased from an old cinema in St. Austell at £1 apiece. Tracking and lights plus a cinema screen valued at £500 were all sourced and purchased from Trowbridge for a fiver. Volunteers from all walks of life pitched in to create our theatre. 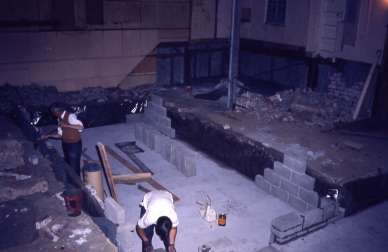 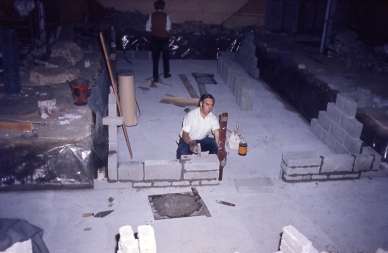 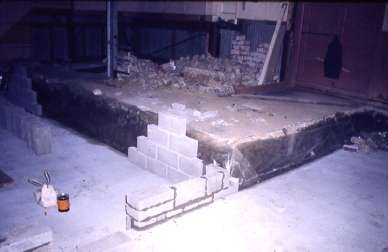 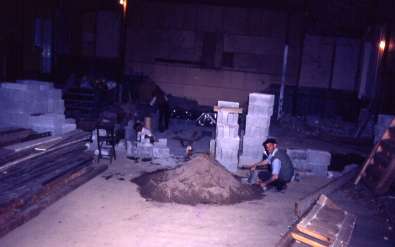 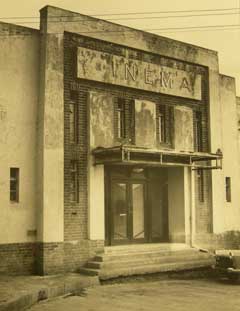 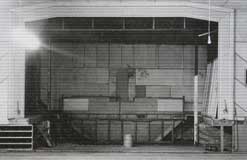 The first HATS production, Hansel and Gretel  by Wilfred Miller opens in the new theatre. This is regarded by many as “HATS’ first show”.

In this production are many people who deserve a long-service medal, having joined HATS in the early days or migrated across from the Theatre Club, and stayed members all this time. Recognisable names include Mary Osborne, Annette Dennis (nee Vanstone), Pam Crumblehulme, Robert Painter, Philip Barfett, Shirley Daniel, Susan Painter (nee Fitter), Crispin King, Bill Crumblehulme, Chas Painter, Chris Osborne, Dorothy Veale and Dennis Veale. Also worth mentioning is Celia Sanders who was a member from these early days until her death in 2018. At the time of her death, she was still a very active member, being both the Society’s Treasurer and selling programmes and ice creams for every performance. 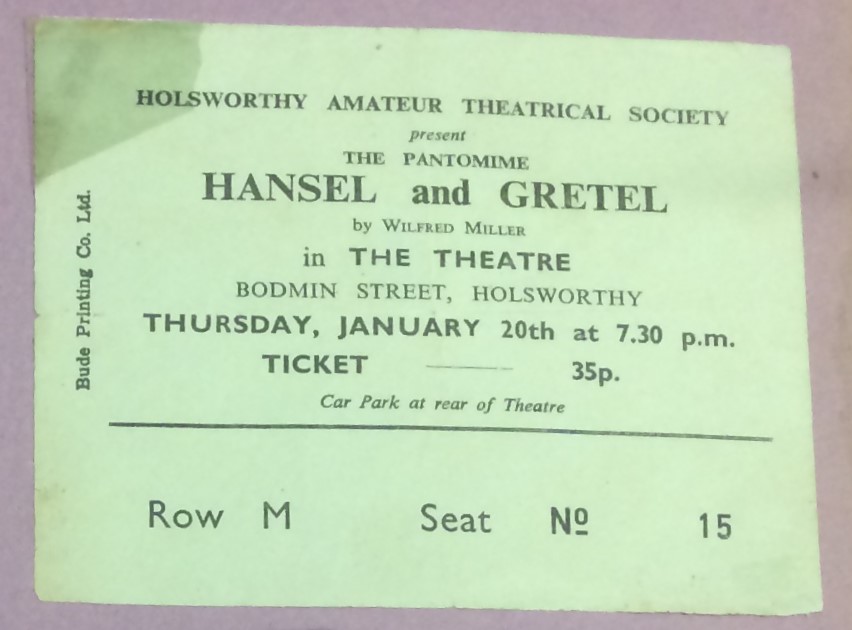 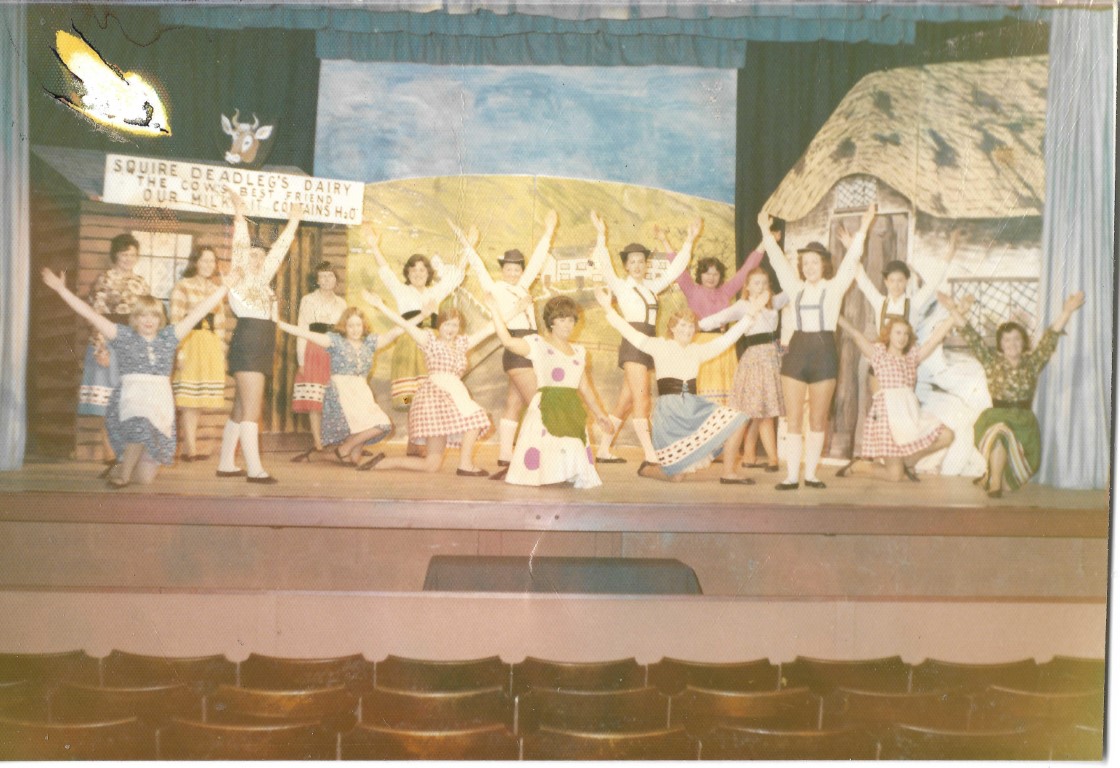 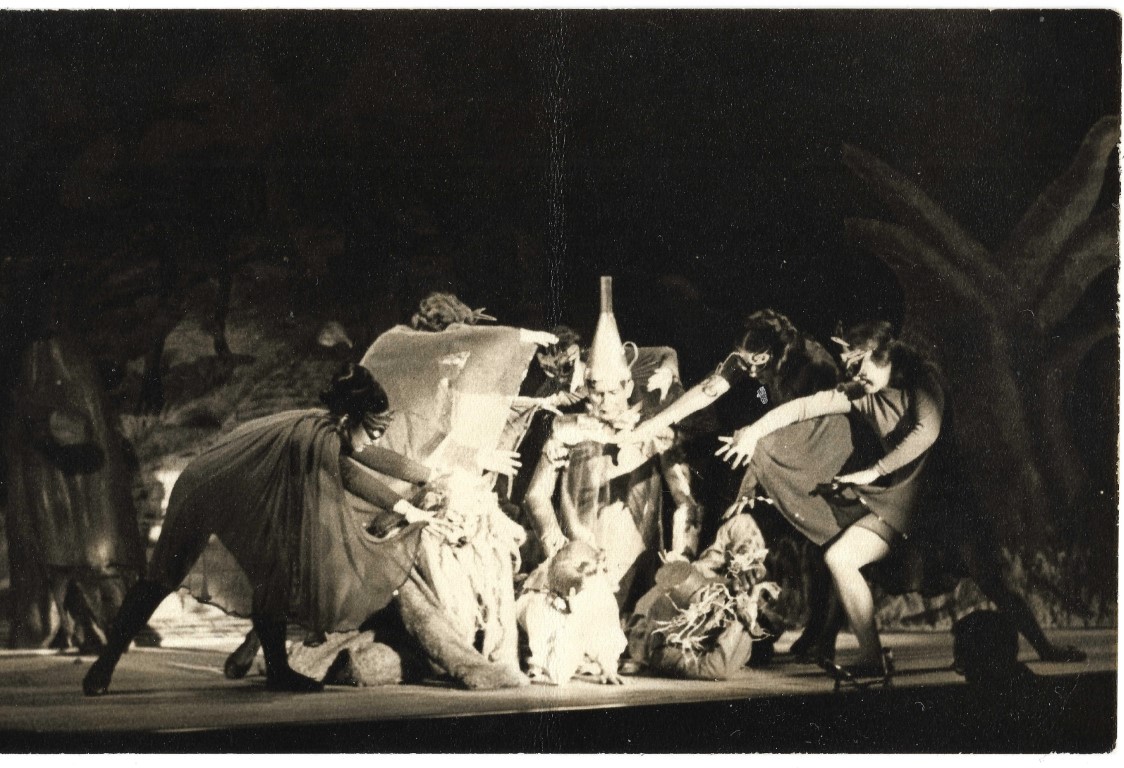 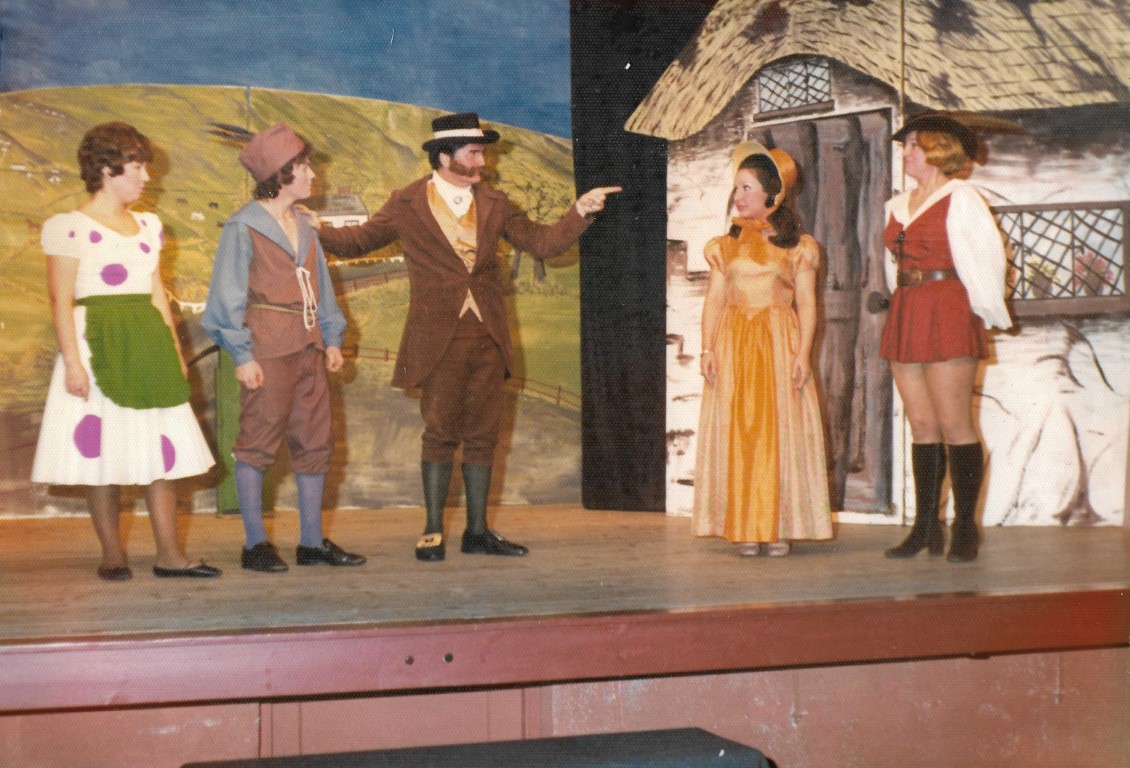 A harsh winter isn’t enough to stop HATS – the pantomime Red Riding Hood by John Crocker opens in a blizzard. 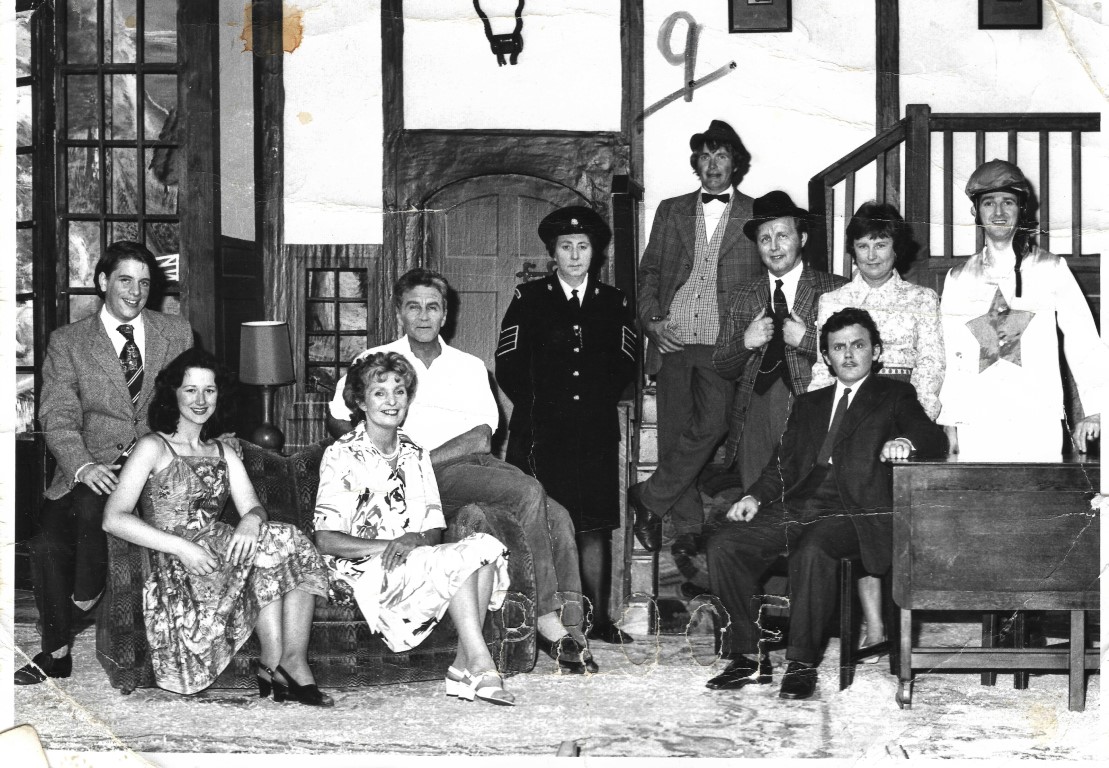 Babes in the Wood by Verne Morgan is produced by HATS – this is Mary Kelley’s last pantomime, and the end of the Kelley era. Mary later moved to Southampton with Val, where she passed away in 2000.

Mary Littlechild begins to produce pantomimes for HATS. Mary had trained at the London Guildhall School of Music and subsequently threw herself into HATS life. Her husband Bill made a great stage manager and they were both great assets to HATS. However, this was not to last and sadly Mary died in 1991. 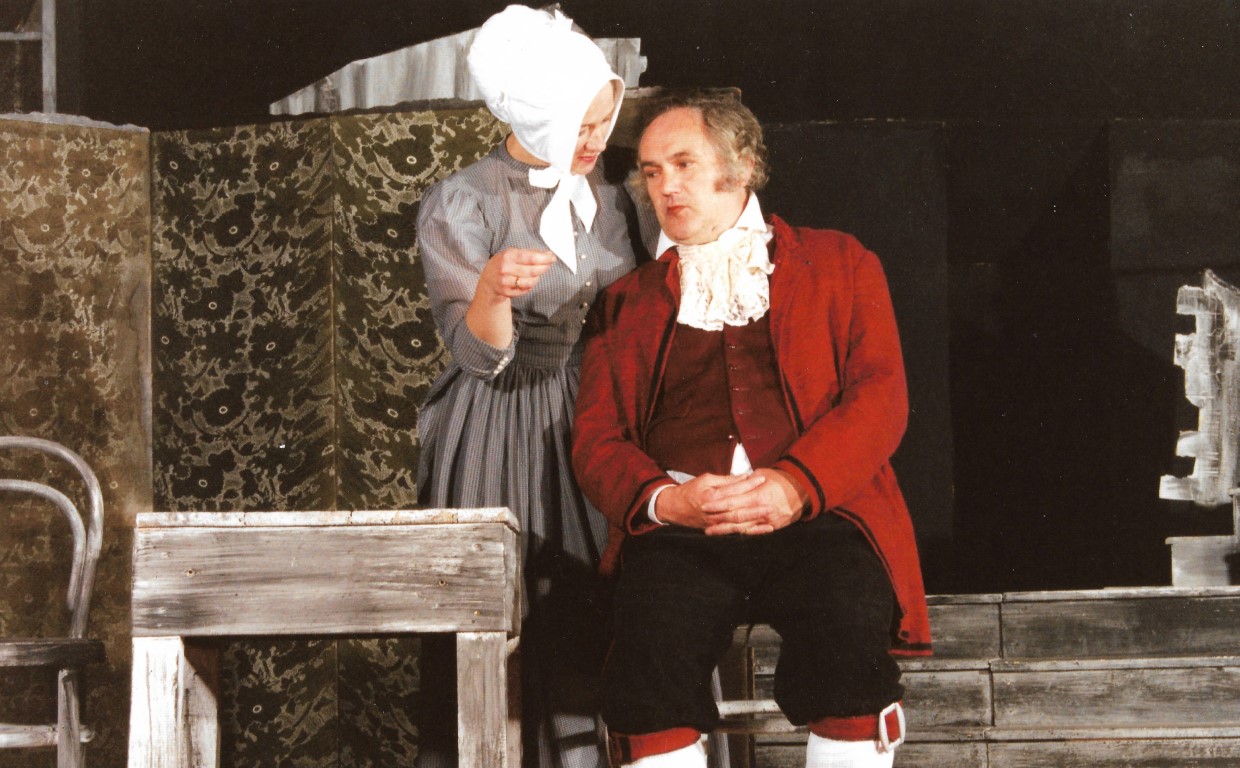 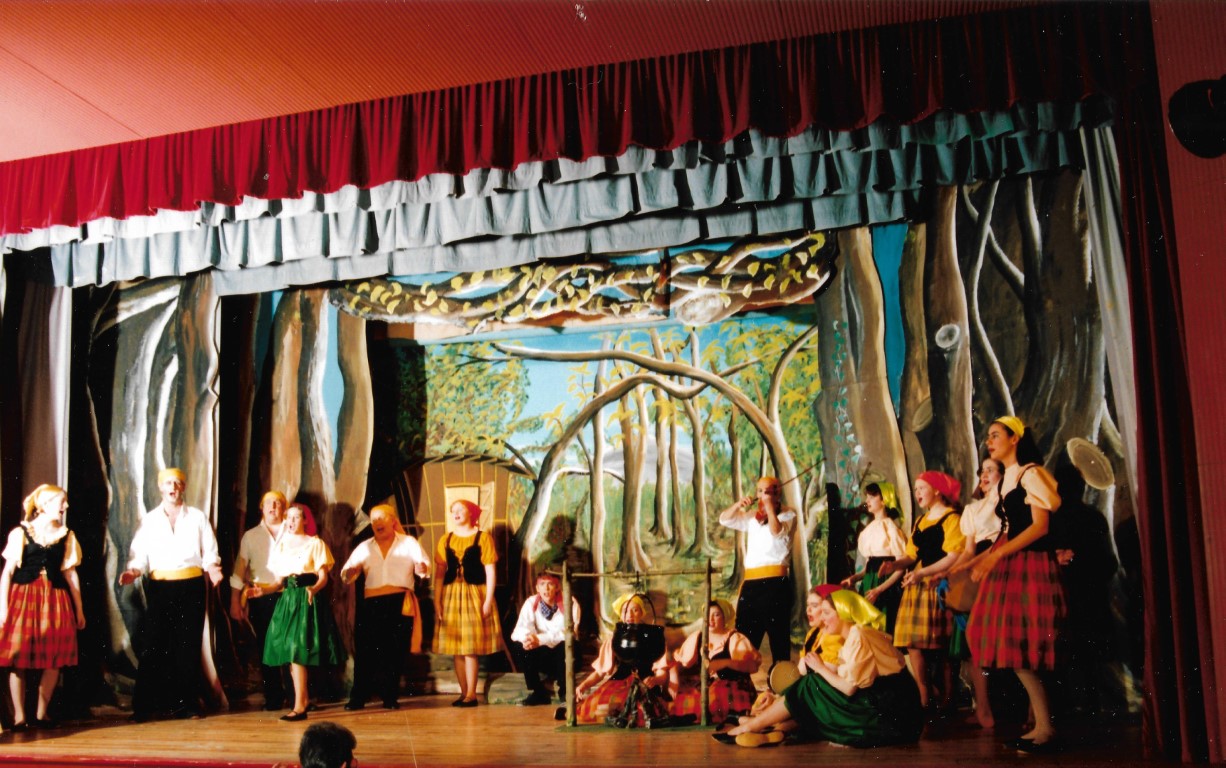 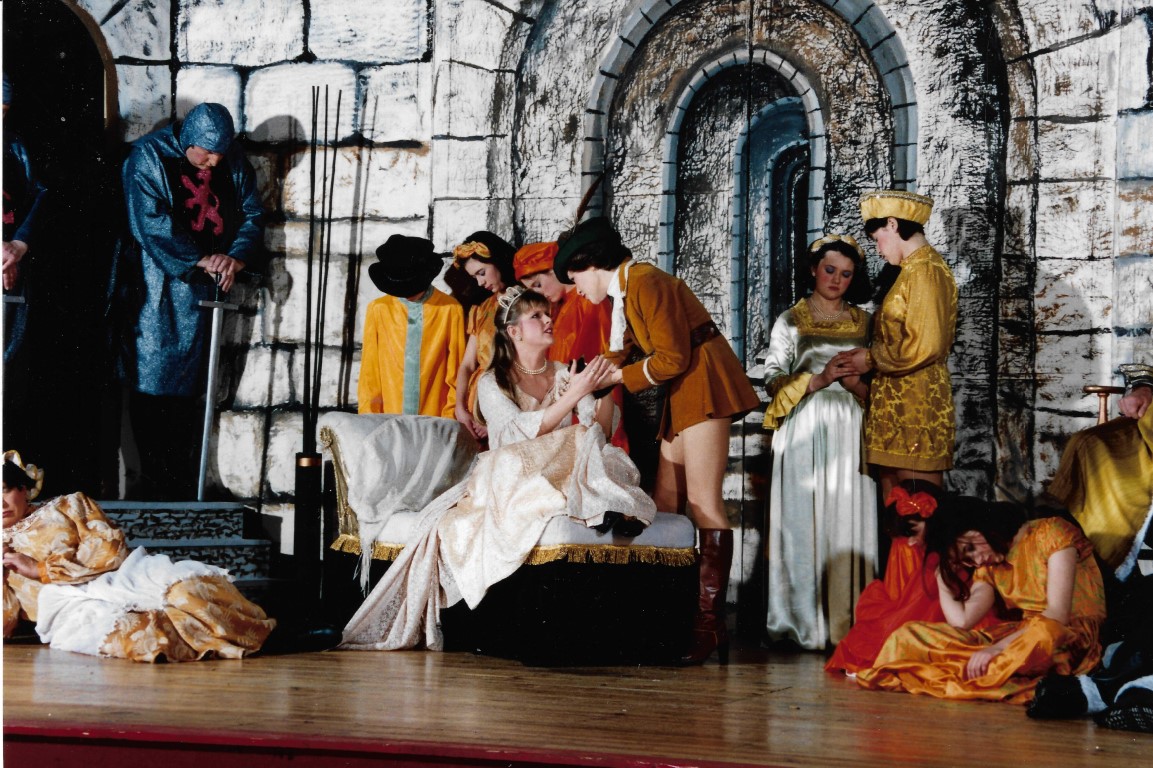 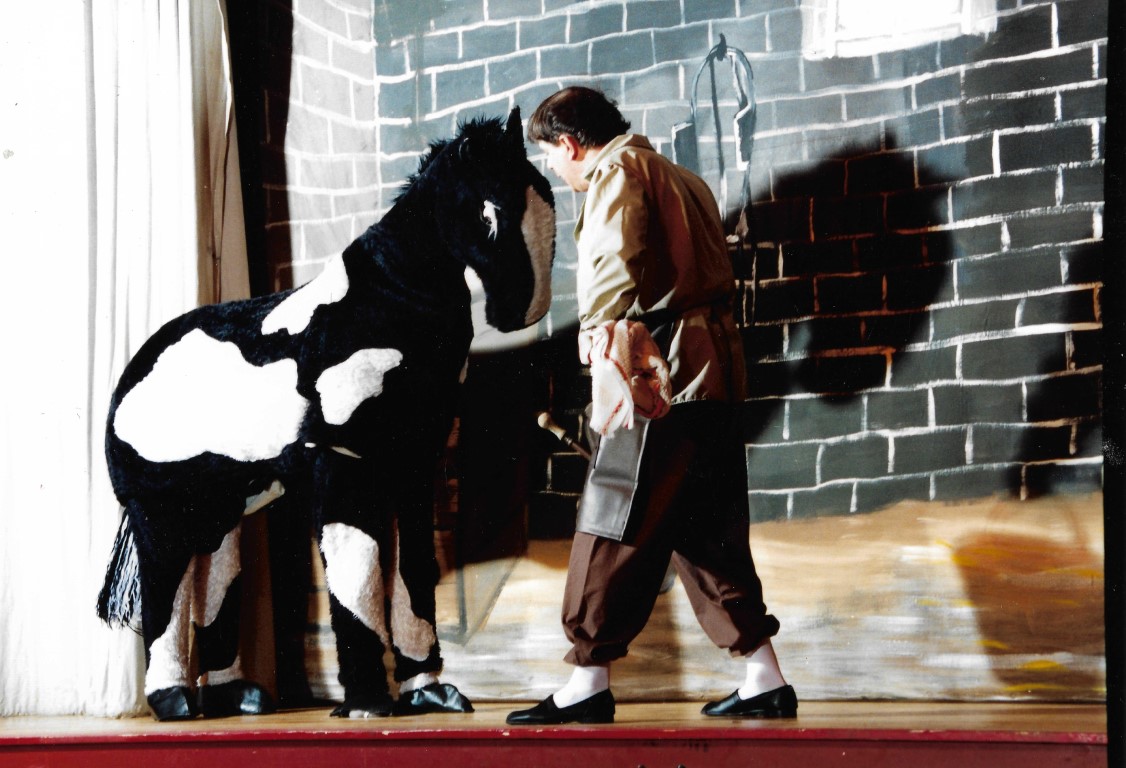 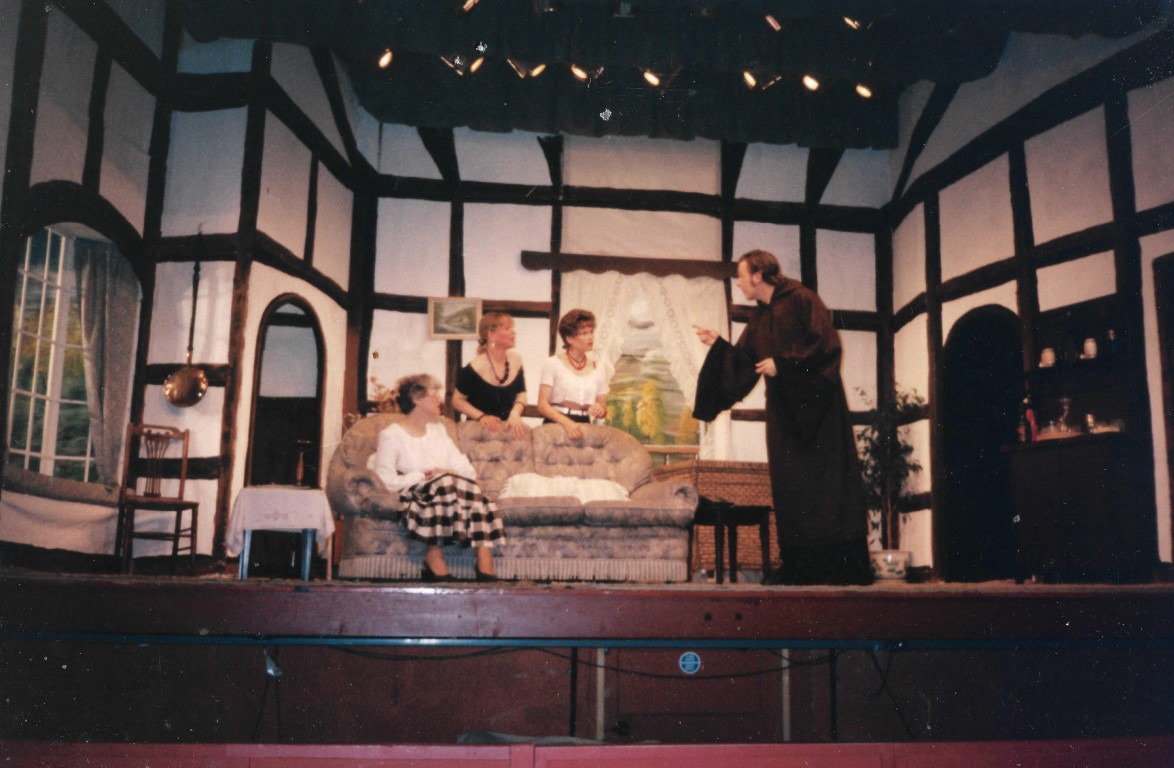 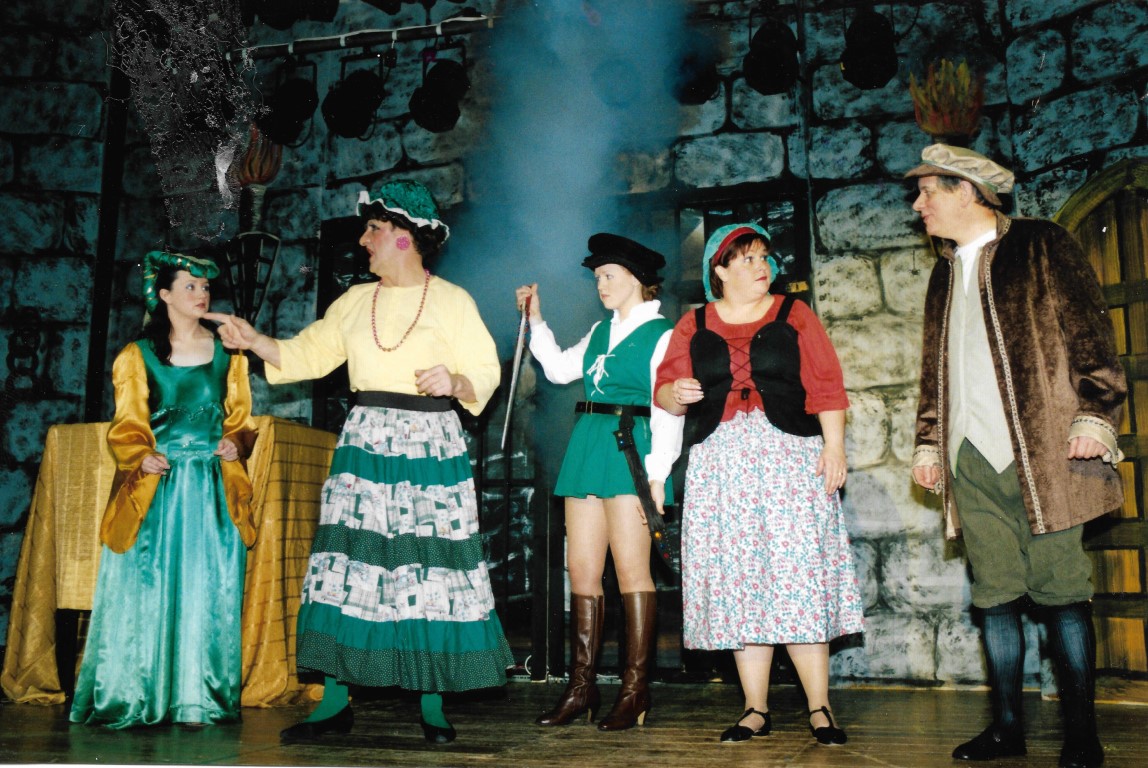 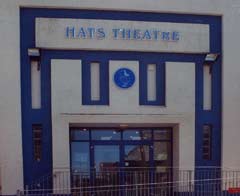 The theatre closed for five months for refurbishment. The foyer was completely redesigned to incorporate disabled access. The new look front, foyer and auditorium were ready in time for the play It Runs in the Family.

The constitution is adopted and HATS is officially registered under the Charity Commission.

Mary Osborne and Annette Dennis devise the show We Had A Dream, containing anecdotal, dramatic and musical memories of fifty years of HATS and Holsworthy Theatre Club shows.

HATS take a step into the future and the HATS Website goes live for the first time. This is created by HATS member Ron Lester.

The first “Wonnacott Shield” is awarded. This is given annually to the most improved or most deserving member. The first ever recipient was Charles Jeffery-Hudson.

HATS win a NODA Award of Excellence for the pantomime ‘Sleeping Beauty.’

HATS win a NODA Award of Achievement for the farce ‘Noises Off’ by Michael Frayn. 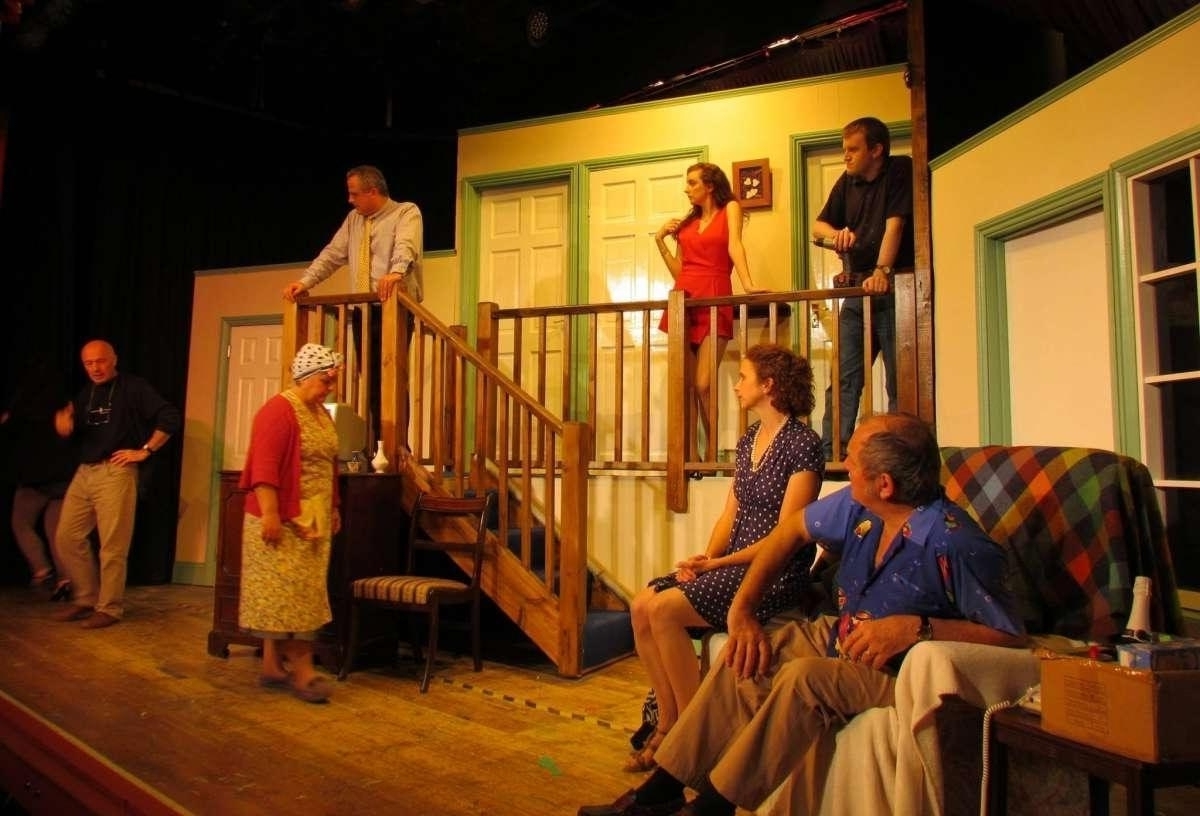 New theatre trustees are installed following the deaths or resignations of our previous ones. The trustees are decided to be Pam Johns, Nigel Clark, Tony Prouse and Robert Painter. The licence holder is amended to be HATS itself.

A new constitution is adopted at the AGM.

HATS Theatre closes after pantomime and a new stage floor is laid in time for rehearsals of Blackadder Goes Forth.

HATS’ first documented ‘sell out show’, Lest We Forget, a commemoration of 100 years since the end of World War I was produced by Lesley and Michael Wonnacott. Proceeds were split between the Holsworthy branch of the Royal British Legion and Help For Heroes, echoing the donations that the Dramatic Society made during the years of the Second World War.